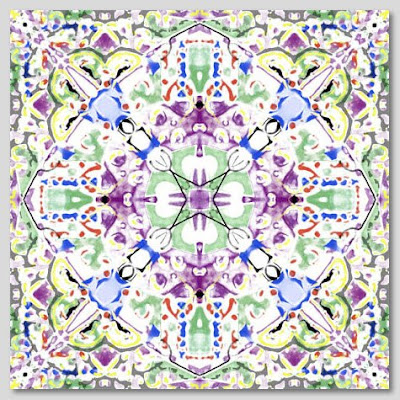 About 2 months after my second spine surgery, while lying in a hospital bed at home and looking at a painting of a fish on the wall, I began to think a lot about art. In the painting, a single abstracted fish is dissassociated from any context, a metaphor for a “fish out of water”. In my own way I too felt like a fish out of water, like a beached dolphin as I lay incapacitated and unable to participate in the world, especially in the passion for my profession as an architect.
The fish hung in my home as a child and it was my favorite painting. As I lay in my hospital bed, in insidous pain, and looked at the fish, it gave me great comfort. I realized that, if I were going to make sense of what was happening to me, art could help me find that truth. I knew I couldn't paint. The physicality of it wasn't possible, but I could use a computer. I could sit for an hour, perhaps, a couple of times a day. A somewhat schizophrenic way of going about creating, but it would have to do. So, I began. I got Photoshop. Every day, a little at a time, I began to learn how to use it as a creative tool. And then I began to create. As I work, it has become a way to move through the pain to a place of expansion where pain does not live.

The art I create has a therapeutic effect by enabling me to get into a meditative and mindful state. My earliest work explores visual meditations of my spine as abstracted skeletal forms and skeletal creatures of my imagination. I found that stripping away the external to reveal these internal structures helped me be more mindful of my own body and with this awareness helped me through the difficult post operative emotional despair and pain I was going through. Within other works are forms influenced by many interests; amoung them, my love of 20th century modern art, especially the New York School of Abstract Expressionism and Joan Miro. My interest in eastern and islamic artistic expressions come through in my reinterpretations of the mandala, whirling dervishes and geometric pattern making.

As my art has evolved, I have learned to use my art as therapy to help me with my feelings of confinement, pain, and my inability to bend, by creating whimsical characters of my imagination, called whimsies, carefree and unencumbered beings, free of the constraints of gravity. As I endeavor to tap into my inner child, I vicariously imagine myself a part of phantasmagorical worlds. In these works I have built with pixels, my own inner theatrical stage sets in which to play out my desires and conflicts. While creating these works, I can temporarily live vicariously through them and achieve a sense of freedom outside my physical body.
Andrew Reach's web site here
Posted by Art in Healthcare at 10:33 AM