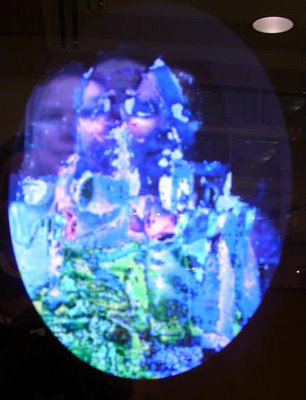 Philip Kohn is a researcher studying brain function in the Section on Integrative Neuroimaging at the National Institute of Mental Health. During his eight years at the NIH, he has been involved in studies of memory, schizophrenia, Williams syndrome, aging, reward and story comprehension. His interests in artificial and natural intelligence, evolution, photography, psychology, interactive arts, mathematics and computer science have come together both in interdisciplinary study of the brain, and in the creation of new works of art using technology as a medium.In 2002 he had his first public showing of an interactive video installation called "Once Upon a Time." This piece allowed participants to add their own short video segment to the ends of a growing story tree. He was surprised by how easily people shed their inhibitions in the context of seeing themselves "on display" as part of an art work. He decided to further explore audience participation in interactive video art with the idea of creating media which would engage people in the creative process.Making art and designing experiments both involve playing with possibilities to best bring to light the effects of interest. In both the result is often not what was expected. Having an open mind to the unexpected is part of the creative process in both art and science.While making "The Looking Glass", there were many happy surprises that were part of the interplay between artist and medium, or between imagination and reality. For example, the method used to separate people from background had the side effect that standing still causes you to disappear like the Cheshire cat in Alice in Wonderland with the eyes and mouth disappearing last. At first this seemed like a problem, but then the realization came that this was a wonderful way to encourage people to move around. One of the goals from the start was to make something that would cause people to dance around and act strangely becoming their own exhibit for others to wonder at. The hope is that the playfulness that went into the creation of The Looking Glass will be echoed by the play induced in its audience.Just as we sound different to ourselves when we hear our voice played back, we also look different to ourselves when the bonds of immediate reality are broken. This installation breaks down the reality of the mirror in time, space and color. Every minute it changes the type of distortion. Some of these include: time delay, warping the image when you move your hand across it, drawing with your hand, time speed up and slow down, time forward and backward, time re-splicing, mirror flipping, rotation, coloring and zooming selected colors.Note that no video is saved for more than a minute, and that this exhibit is completely self contained without any connection to other computers or networks.
Posted by Art in Healthcare at 5:52 PM