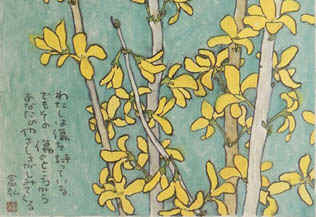 From an article by Katie Boswell.... "One of the exhibits currently on display is the artwork of Japanese artist and poet Tomihiro Hoshino. In 1972, Hoshino was working as a physical education teacher at a junior high school in Japan when he injured his neck in a gymnastic lesson and was left paralyzed from the neck down. During his nine years in the hospital, he learned to paint by holding a paintbrush between his teeth. It was this talent and his faith that gave Hoshino hope for the future. His beautiful watercolors of flowers are complemented by his accompanying poems, which give a glimpse into the challenges of his condition and his deep sense of joyful hope.
One watercolor's accompanying poem reads:

"They went through a dark long period under the ground.
They sprouted at great risk to life.
But blades of grass show us the most beautiful figure
of their lives without a single word of such part."

When Hoshino's work came to the Clinical Center for display, it was originally intended only as a temporary exhibit. However, when he read the endless comments NIH visitors, patients and staff had written in the exhibit's guest book [visit www.cc.nih.gov/ccc/ccnews/current/ to read some of the comments], he was extremely moved. "He was so impressed by how Americans responded to his art that he donated the entire exhibit to the Clinical Center," says Lillian Fitzgerald who works in the CC office of facilities management.
Katrina Blair, the office manager for the lab of biochemical genetics at the National Heart, Lung, and Blood Institute, is a poetry therapist trainee and graduate student who found special meaning in Hoshino's art. "His work speaks to all the senses," she explains. "Poetry therapy is about your personal life journey. And a poem or piece of artwork can talk about trials and tribulations, but in the end, for it to be healing, it has to come back to hope. Every piece I picked from Hoshino's exhibit spoke of hope. His work spoke very heavily of that."
The Hoshino exhibit is now permanently displayed on the fifth floor of the Hatfield Center."
Posted by Art in Healthcare at 5:45 PM