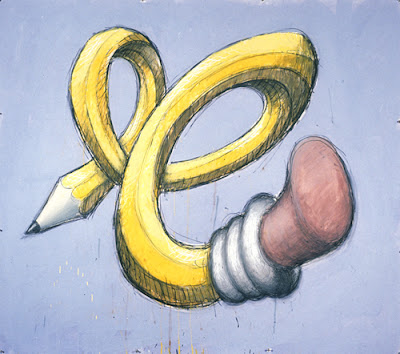 The common yellow pencil serves in these works as a metaphor for creation. The poet writes with it, the artist sketches with it. Twisted and curling, looping and leaping, the work of creation is a muscular and robust activity. By extension, the pencil suggests the written word, specifically the central role played by ‘The Word’ in the Biblical creation narrative. The works shown at NIH are from a series of gouache paintings, (gouache is like watercolor, but more opaque), entitled Psalter – an old word for the Bible book of Psalms. As often as not, it is God’s role as creator that the psalmist magnifies through his hymns of praise. It is as hymns of a sort that these pencil paintings not only describe an energetic and encompassing space, but fill that space with the music of creative utterance.
Posted by Art in Healthcare at 8:14 PM