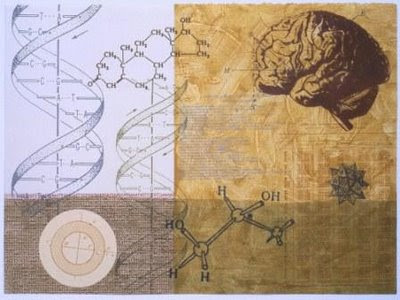 Math Series was inspired by a hydrodynamics textbook published in 1890. Most pages are covered with individual equations and their derivations, which are very abstract visual images to me. The equations, punctuated by prose, become an exercise in positive and negative space. I combine the hard equations with organic forms from my etching, drypoint and woodcut plates as well as additional geometric symbols. By uniting the disparate elements of chaos and order, I have created my own visual language.In the time since I started Math Series, I have had the honor of working with several scientists and mathematicians and have incorporated their work into my prints.Knowledge Series stems from Math Series; here I have introduced biological elements along with organic molecules, tables and graphs.All the prints are monoprints, which are one-of-a-kind prints with a repeatable matrix. I combine paper lithography with collagraph, etching, drypoint and woodcut plates to create the images. Each color represents a separate pass through the etching press.
Posted by Art in Healthcare at 7:50 AM