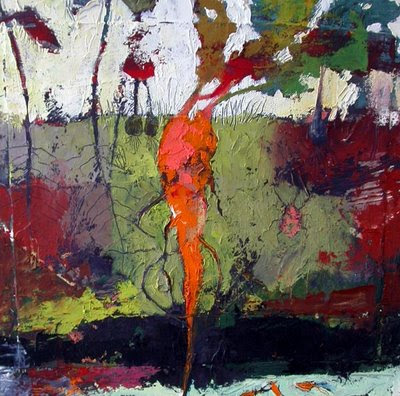 Sheep, whose given first name is Elaine, grew up the oldest of five in rural Maine, with parents who did not support her artistic plans. They wanted her to make a decent living, but creating art "was all I ever wanted to do," she says. She acquired the nickname Sheep as a teenager trying to grow out her bangs, and it stuck.
After getting a degree in fine art at the University of Maine, Sheep married her high school sweetheart, Charles Jones, and followed him from one academic job to another. She painted in her spare time and in her twenties had one successful art show. She never forgot how good it felt.
The couple moved to Fairfax in 1987, when Charles landed a tenured position at George Mason University. For several years, while raising two sons and working as a waitress, Sheep had no time to paint.
But she started entering local art shows again in her forties, and almost immediately began winning awards. In 2000, she became a resident artist at the prestigious Torpedo Factory Art Center in Old Town Alexandria.
Sheep has limited depth perception, the result of an accident at age 3 that left her blind in one eye. She and others wonder if her unique visual perspective may have something to do with her success.
"That is something people really do talk about, is the layering in her work, and I think she's probably overcompensating for the fact that she can't see in one eye," says Jennifer Glave Kocer, director of the Rentz Gallery in Richmond, which carries Sheep's work.
Many of Sheep's paintings depict scenes from farms and nature, including fanciful renderings of plants and their roots, as well as dirt and the creatures that live in it. "When you pull up the roots of a plant, you don't know what else is down there. I just let my imagination go," she says.
Excerpt from the Washington Post
Making It
By Margaret Webb PresslerSunday, October 22, 2006
Posted by Art in Healthcare at 6:44 AM